Baltibrew members hail from a wide range of professional backgrounds, from the service sector to the arts to engineering and finance.  Among our ranks are several bonafide microbiologists.  Drawing on their expertese, the club has embarked on a challenging and multi-part project for the year: we're going to try to capture, isolate, culture, and evaluate a Baltimore native brewers yeast! 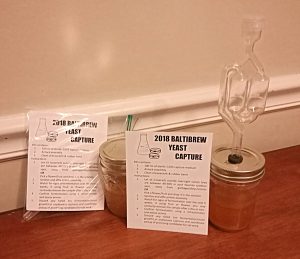 While a number of our brewers produce tasty beverages via spontaneous and mixed fermentation, there are a several challenges in an attempt to isolate a strain of yeast for brewing purposes.

After discussing the challenges, we set about designing a simple protocol and capture media to distribute to club members at our April meeting, with the intention of collecting promising candidates at the next.  We prepared and processed the capture media into 8 oz mason jars. Starting with 1 liter of distilled water and 143 grams of DME, we calibrated a pH meter and added enough lactic acid (~.5 mL) to drop the solution below 4.50 pH. The wort ended up at 1.025 SG (as converted from a Brix reading of 6.4) and a pH of 4.38. We processed 20 jars filled with 100mL of the media and half of a hop pellet each in a pressure canner at 15 PSI for 15 minutes. 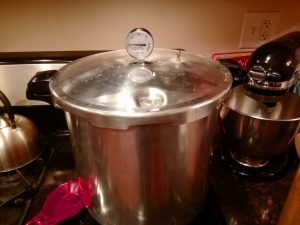 While the canner ran, we crafted airlocks from extra mason jar lids, rubber grommets, and S-type airlocks.  The goal here was to provide a members with a simple way to limit oxygen exposure after capture, hopefully keeping some of the less favorable aerobic organisms in check. 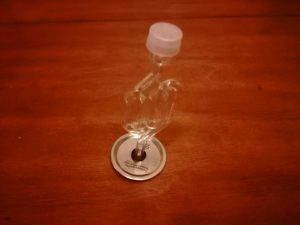 Airlock lid for after capture.

The capture media, modified lid and airlock, clean cheesecloth, and a protocol sheet were bundled into a capture kit for members to take home.  Members may choose how to conduct their capture; either directly from a biologic sample like a flower or fruit, or from the outside air itself.  Admittedly, the odds are low but the fun is be in the attempt.  Read more as we take our captures into the lab! 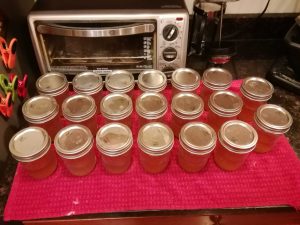